IS A KISS REALLY JUST A KISS? 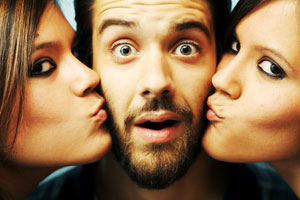 Kissing is one of the most common forms of sexual expression, it can also take on many different meanings.

Kissing is one of the most exciting, yet misunderstood, forms of physical contact. Although many people consider a kiss to have a purely sexual connotation, this is not always the case. Consider someone kissing land after returning from a long trip at sea or someone kissing a friend hello. While kissing is one of the most common forms of sexual expression, it can also take on many different meanings, all of which symbolize powerful emotion.

Some scientists believe that we evolved lips for eating, and later they became a part of speech. Regardless of their origin, there’s no question that our lips can set off a variety of chemicals in the brain, and these chemicals go on to have a huge effect on how we conduct ourselves. Science also suggests that kissing is used as a condition when selecting a mate. Locking lips with a potential mate can often deliver chemical signals which can suggest whether that person will be suitable in the future.

As further proof that kisses carry with them powerful messages, British Zoologist Desmond Morris has claimed that kissing mimics the feeding process in primates. Mothers chew food for their young, and then they lean in with lips turned outward to deliver the food. As a result, man more than likely did the same thing at one point in time, thus leading to kissing being used as a sign of comfort and affection.

Additionally, many scientists also believe that pheromones are involved in the power of a kiss. Pheromones are unseen chemical agents which are unique to each individual. It is believed that they carry with them a variety of messages which affect the unconscious mind. There are a variety of insects and plants today which use pheromones to send signals to animals or other insects, and these signals may express everything from sexual attraction to where food may be located.

To study the effect of pheromones on humans, Swiss scientists conducted a test in which they instructed female participants to smell a number of t-shirts which had been worn by different men. When the results were in, it turned out that the women did not choose the best smelling shirts at random. When the DNA of the female and male participants was analyzed, it turned out that the women choose the shirts of men who’s histocompatibility complex was different when compared to their own. This complex represents the genes that determine the strength of our immune systems, meaning the women picked men who were more likely to compliment their own genes. With this information, it’s easy to see why doing some smooching may help us to determine who will be the most compatible and suitable mate.

So, the next time you decide to pucker up with your sweetheart, just remember: a kiss is never just a kiss.